The Father Center is excited to announce our 2021 Platinum Dads event raised over $30,000 in funding which will be used to provide services to fathers in 2021-2022.

Like the metal for which it is named, responsible fatherhood is precious, strong, enduring and priceless…..something to be treasured and cherished for a lifetime. Each year on the Saturday before Fathers’ Day, the Platinum Dads event showcases the vital contributions of fathers and father-figures. Men are nominated by their families, and/or peers. Additionally, a more “senior” man is chosen to be the recipient of the Robert E. Alston Legacy of Fatherhood award.  This gentleman sets the standard for other men by his longer term example of dedication not only to his family but to others in need of fatherly guidance and support.

Stand by for information about the 2022 Platinum Dads event to be held in June 2022 where men will be honored, in the presence of family and friends, as Platinum Dads, and one man will become the Legacy of Fatherhood awardee.

Platinum Dads is The Father Center’s signature family-friendly fundraising event that honors men who demonstrate exemplary fatherhood through a commitment to their families and communities. All monies raised are used to directly support The Father Center’s workforce development activities, job training programs and services.

The following men were honored at the 2021 Platinum Dads event: 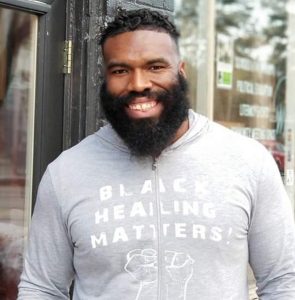 Affectionately known to his friends and colleagues as “Phil,” Phillip J. Roundtree, the CEO and Founder of Quadefy LLC provided the keynote address at this year’s 16th Annual Platinum Dads event hosted by The Father Center of New Jersey. Mr. Roundtree is a dynamic Scholar-Activist who has been a practicing social worker since 2005. Recognizing society’s lack of emphasis on Black mental health, he’s evolved into a staunch mental health advocate for marginalized and underrepresented communities, using his personal and professional experiences to promote individual and community resilience.

Phil is a down-to-earth communicator and his humbleness is apparent the first time you meet him. When asked to supply a photograph for this article, he urged me to showcase other fathers and stated “I think it’s a perfect occasion to showcase/celebrate more fathers as they’re the reason I even have this opportunity.”

Recognized as a 2018 Black Enterprise magazine “B.E. Modern Man” honoree and selected as a TedxTalk speaker, whose idea worth spreading “Black Mental Health Matters” is garnering rave reviews, Phil is also the Host of “Rhetorically Speaking,” a live daily digital show on Youtube. As an evolving influencer in the field of fatherhood, he also leads the weekly podcast, #YouGoodMan? A Men’s Wellness Podcast on all streaming platforms. His message for Platinum Dads, which is set to take place virtually, will be crafted specifically and exclusively for the event audience with his own singular recipe of motivation and authenticity.

Save the Date:
Platinum Dads Awards

See you in June!